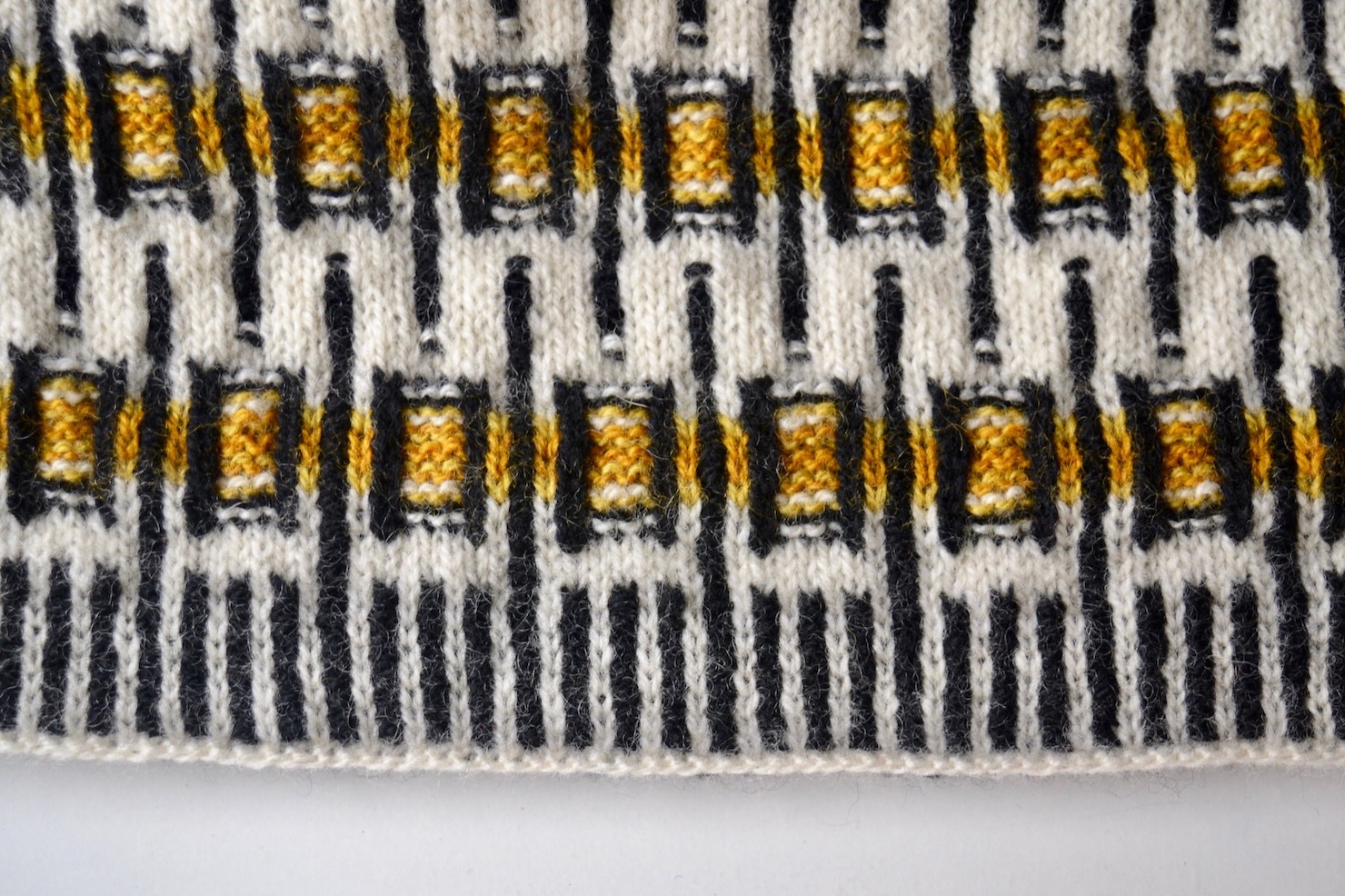 I’ve searched through my books on Shetland knitting to try to find out when corrugated ribbing became such a central element. But none of my books comment on that specifically. In Alice Starmore’s “Book of Fair Isle Knitting” there is a photo of the earliest known Fair Isle hats, from around 1850. They are covered in OXO pattern bands, but none of them have corrugated ribbing.

On the knitting famous portrait of the Prince of Wales (later Edward VIII), painted by John Lander in 1925, the prince’s sweater clearly has edges in corrugated ribbing. It also has OXO bands throughout, painted so clearly that you can almost knit them from the painting! It is said that the golfer prince started a new fashion by showing up in this outfit (knit sweaters used to be for poor workers and fishermen). But more on that some other time – here, I’ll just use the prince to say that corrugated ribbing seems to have emerged between 1850 and 1925.

using the same number of stitches for your corrugated ribbing as for the rest of the garment.

That is different from a garment with normal 1-color ribbing and stockinette, for example. In that case, my rule of thumb is:

use 10% fewer stitches for the rib than for the rest of the garment.

But a deeper problem with corrugated ribbing is this: it is tighter than a normal cast on (by normal, I mean a long tail cast on). So if you were to cast on normally and then work corrugated ribbing, the cast on edge will stick out and the rib will never lie flat. The solution is to use another type of cast on. I find the old Norwegian (also known as twisted German) cast on works well.

I first saw the old Norwegian cast on in action when I was teaching children to knit at the Textile Museum in Herning. I was working with Gerda, a volunteer who is not very young. We cast on the stitches for our knitting students, since it is hard enough for them to just knit the stitches. I saw Gerda cast on stitches for a student, and I was quite surprised that her standard cast on technique was not the same as mine. I later connected the dots, and realized she was using the old Norwegian cast on. So that technique must have been in use in this area as the standard method.

The old Norwegian cast on can be used anytime you would use a long tail cast on, but it’s moment to shine is for corrugated ribbing.

Here is a video where I show the old Norwegian cast on:

In the last part of the video, I turn the work around. The side that faces away from you as you cast on has a row of bumps that look just like purl bumps. Before beginning the corrugated ribbing, I turn the work so the bumps are facing me: the bump side is the right side. And then it will look like this:

Here, I’ve used the simplest possible corrugated ribbing for the edge of a vest in my own pattern, Folkvang. I began with an old Norwegian cast on in white, and you can just make out the bumps.

The pattern for the Folkvang vest will come later. The vest in the photo above was my prototype, but something bad happened to it when it was almost finished. I had it in my knitting bag in my car, along with a thermos full of tea. The thermos tipped over, the vest was soaked in tea, and the spot covers about half the vest and does absolutely not come off. Right now, I’m knitting something else to get over that event. But I’ll return to that design as soon as I find the mental strength.